Sunday was a good day for Liverpool. A very good day.

Jurgen Klopp finally got one over on Jose Mourinho. The club returned to the top of the Premier League and passed a test which will have given the team title confidence, and all of that happened against their rivals Manchester United.

Liverpool were by far the better team but Jesse Linagrd’s equaliser for the away side brought frustration as Klopp’s men struggled to unlock the United defence.

There’s a reason the manager wanted to sign Nabil Fekir following the loss of Philippe Coutinho, and it’s to help pick a lock when a defence is deep and not giving in.

Instead, Klopp was able to bring on Xherdan Shaqiri, the summer signing from Stoke City who is increasingly looking to be a bargain purchase.

The Swiss international scored twice, with both shots deflected, but Liverpool had earned such luck given how many efforts they’d had. The more shots a team makes, the likelier they are to get a lucky break. 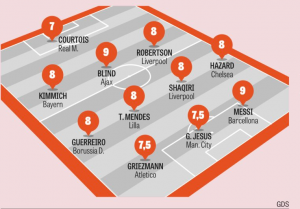 Shaqiri has subsequently been named in Gazzetta dello Sport’s European Team of the Week, and he’s joined by teammate Andrew Robertson.

The Scotland international was once again non-stop and received praise after the match from Mourinho.