Gazzetta dello Sport have a rather interesting article on Tuesday looking at Mino Raiola’s ‘black summer’, focusing on everything that went on and his lack of transfers.

Speaking of the Manchester United midfielder, the Italian newspaper explain he’s the reason behind the breakdown in José Mourinho’s and Mino Raiola’s recent blossoming relationship.

Gazzetta state that despite the Portuguese appeared to be moving away from Jorge Mendes, when he went on to sign four of the Italian’s players, the Pogba affair has ‘reestablished the right distances’ and ‘the two hate each other again, at least on the fact of things’. 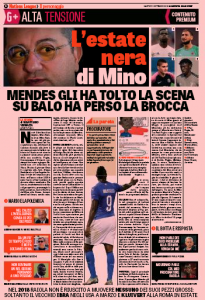 Just like Manchester United was for him back in 2016 and 2017, Juventus could now be his next ‘bank’, having already sent Blaise Matuidi there from Paris Saint-Germain, with much success.

Gazzetta’s grand idea here would be to ensure he’s reunited with Pogba in January, which, to us, seems highly unrealistic considering the cost.

Either way, this feels like it could be the end of the Raiola-Mourinho partnership, meaning the likes of Justin Kluivert or Marco Verratti might never be pushed towards Manchester United while the Special One is still in charge.