Football is largely about capitalising on the misfortune of others, whether that’s as a team or individual players.

This week several Frenchman will get the chance to join Didier Deschamps’ squad after injuries to others, and there’s a chance of some good news for Everton.

L’Equipe cover possible defensive replacements today, and whilst they don’t say it’s the scenario which is going to happen, Kurt Zouma and/or Lucas Digne being picked is pushed forward as a possibility.

Either player being picked would justify their decision to sign for Everton in the summer transfer window, Zouma on loan from Chelsea and Digne in a permanent move from Barcelona.

For the latter, it would also see his value rise and general career outlook improve. Digne was quite happy as a back-up at Barca but missing out on the World Cup, and the Catalan club making it clear he was surplus to requirements, all helped send a strong message to 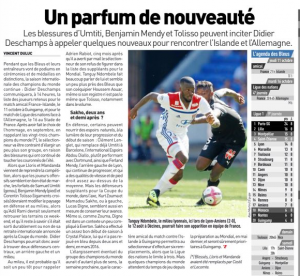 L’Equipe say Digne and Zouma have had starts to the season which are a ‘little complicated’, so that could go against them.

Other options include Clement Lenglet, Abdou Diallo and Mamadou Sakho for central defence, and Ferland Mendy for left back.