Everton’s focus may have been on improving the squad this summer, but there was also a desire to clear out the group as well.

Marcel Brands and Marco Silva inherited a big playing squad last year and have spent the last 18 months trying to reduce it and clear out the deadwood.

Brands has succeeded on that front, but some players remain, and one of them is Kevin Mirallas. The Belgian is out of favour at Goodison Park and spent the best part of the last two years on loan at Olympiakos and Fiorentina respectively.

It’s clear that he’s not part of the club’s long-term plans and it now appears he will be offered an escape route back to his native Belgium. 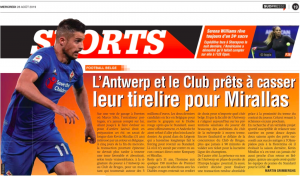 Nord Éclair are reporting that both Antwerp and Club Brugge are interested in signing Mirallas from Everton and that he’s interested in a return to his homeland.

The newspaper say it would cost around €5m to get Mirallas out of Goodison Park, and Antwerp are pushing hardest, with the club’s management willing to match Mirallas’ wage demands to bring him to the club.

It’s stated that Mirallas has ‘never been so close’ to a return to Belgium suggesting that negotiations are moving quite well at this stage.

Everton certainly won’t oppose him leaving and €5m for a player they don’t want who only has a year left on his contract is the kind of deal they are unlikely to turn away.