Tanguy Ndombele has continued to draw attention from top European clubs, even after struggling with injuries and patchy form in his debut season at Tottenham Hotspur.

On July 24th, we covered claims from Sport1 explaining that Bayern Munich have ‘enquired’ about the midfielder as a potential target to replace Thiago Alcântara.

It was also suggested the Nerazzurri are not convinced with Marcelo Brozović, which is why the Frenchman has been identified as target.

Journalist Miguel Rico, writing on the last page of today’s edition of Mundo Deportivo suggests Inter and Barcelona are interested in the Spurs player.

The Serie A side offered the Croatian to Barcelona a few months ago, but they rejected the opportunity to sign him. According to Rico, Inter now ‘propose’ Brozović to the north London club, as part of the deal to take Ndombele. 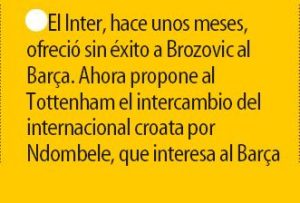 Rico doesn’t explain whether or not José Mourinho’s side are interested in working out an exchange operation between Ndombele and Brozović.

With frequent rumours around Ndombele’s future, it remains to be seen if he’ll still be at Tottenham beyond the summer transfer window.