Ings has decided to leave the Premier League club this summer as he needs regular first-team football and AMK Spor say Fenerbahce are looking to move in on the attacker.

The former Burnley player has been hampered by injuries since his arrival at Anfield. Since regaining his fitness the 25 year old has been used sporadically by Jurgen Klopp and the player may need to move on this summer.

According to AMK Spor, Fenerbahce sporting director Damien Comolli is in talks with both Liverpool and Danny Ings as he wants to complete the deal as soon as possible. 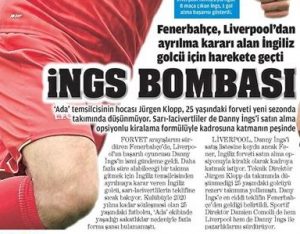 It’s stated Liverpool want to sell Ings permanently but Fenerbahce have offered a loan deal. The Merseyside club will now make a decision if they will lease Ings to the Yellow Canaries.

Ings is contracted to Liverpool until June 2020 and he started just three league games last season.

Southampton ‘ready to shell out’ €6m to secure signing – Move...