Over the past few weeks, the Catalan press have been insisting Ferran Torres is a priority target for Barcelona. It has also been stressed City side will not make it easy for the La Liga side to sign the forward in the winter market.

The situation has forced Barca to look at Chelsea’s Timo Werner and Hakim Ziyech for January.

On December 1st, Sport reported there were ‘new contacts’ between the two clubs, and the Blues are ‘totally open’ to letting the duo leave on loan next month.

Journalist Lluís Miguelsanz, writing in today’s edition of Sport, says Xavi Hernández’s side is ‘moving heaven and earth’ to sign an attacker for the second half of the season.

He says it’s true that Barcelona tried to sign Torres, but they are now beginning to realise they need to look to sign players on loan, ones who are currently not enjoying minutes with their current clubs.

This is where Werner and Ziyech emerge as targets and Miguelsanz claims Barca have been ‘maintaining contacts with Chelsea’. 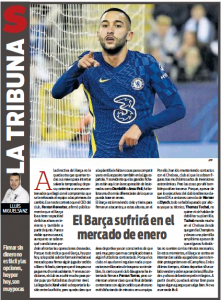 According to Sport, the executives of the Champions League winners gave the approval for Werner and Ziyech to go out on loan in January. The operation could go sideways for Xavi’s side because of the stance maintained by Thomas Tuchel.

It’s claimed ‘everything would have stopped for now’ because Tuchel doesn’t want to weaken his squad midway through the season.

The German ‘commands a lot’ after winning the CL, and he wants to have a large squad at his disposal. Therefore, he is not willing to let either Werner or Ziyech leave Stamford Bridge in January.

Player to snub Liverpool move despite offer from Reds – Set...