Celtic defender Mikael Lustig has spoken about the social media abuse Sebastian Larrson has received after Sweden’s defeat to Spain and revealed it’s something he’s had to deal with since arriving in Glasgow.

Larsson gave away a penalty for Spain’s opening goal during his side’s Sweden’s 3-0 defeat on Monday night.

Speaking to Hallandsposten the Celtic player was asked about the flak the former Hull City man has encountered since the defeat: “You become quite hard-skinned. I’ve been playing in Glasgow for many years and you should see what is sent to me… they would have thought it was terrible. But then it is. There are such trolls.”

After spending seven seasons at Celtic Park it’s easy to see why Lustig, it’s no surprise he’s had to put up with some idiots on social media.

However, the Swede may have played his last Old Firm derby following reports the fullback could be heading back to his home country.

The 32 year old’s contract with Celtic expires at the end of the month and the player confirmed this week there’s interest from Malmo. 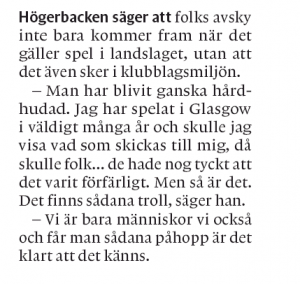 He also said he was disappointed with the way he’s been handled by Celtic with regards to his future, but maintained he still loves the club.