Home Europe “We were convinced” – Liverpool star on the inner belief driving the...
SHARE

Liverpool won the Champions League after defeating Tottenham Hotspur in the final.

The Reds’ success in Europe’s elite club competition came a year after losing the final to Real Madrid in Kiev.

Trent Alexander-Arnold has given an interview to AS’ Guillem Balagué and explained there was belief success would return to the Merseyside club, just after their defeat to Real Madrid in 2018.

“It was a tough defeat. Madrid deserved to win, no doubt, but we told ourselves in the dressing room that we would return to a final sooner rather than later. We didn’t know it would be in a year, but we were convinced,” he said.

Liverpool made it to last season’s Champions League final after overcoming a 3-0 first leg deficit in the semi-final against Barcelona. Divock Origi was the star for the English club in the second leg as his brace helped his side win 4-0 at Anfield.

Alexander-Arnold played a crucial role in helping Liverpool score the fourth goal as he took a quick corner that saw Origi put the pall in the net.

Regarding that corner, the right-back said: “Well, the idea was for [Xherdan] Shaqiri to take the corner, and for me to stay with him so they wouldn’t know if we took it in or out. We had seen that they had difficulties defending a corner.

“I arrived and saw that there were no attentive [Barcelona] players looking at the ball. And I saw Origi in the middle of the area. So, I dared.” 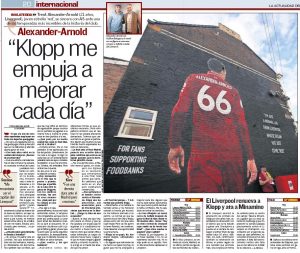 Alexander-Arnold has become an integral part of Liverpool’s starting lineup and the defender has credited Jürgen Klopp for improving him as a player.

“He is someone who really made me who I am today. Someone who has pushed me to improve every day,” the 21-year-old added.

“Someone who has given me so many opportunities that I can never give back so much confidence. He has helped me in every way.”