Record continue their claims of Matheus Nunes potentially moving to Wolves this summer.

Following stating on Friday that Bruno Lage’s club are preparing to formalise an offer worth €45m plus a further €5m in bonus payments, Record push the same in their Saturday edition and add a few more things.

The move to Wolves is said to be ‘gaining more and more strength’, with the club ahead of competitors such as Newcastle United and Everton. Right now, Wolves are trying to convince the player’s representatives and have offered a five year deal to the midfielder.

Jorge Mendes is again thought to be key in the process, and trying to arrange a transfer to the Premier League. Gestifute don’t represent Nunes directly, but it’s not unusual for Mendes to become involved in these type of deals. 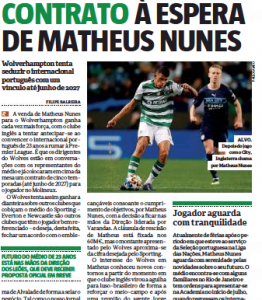 Meanwhile, Record believe Joao Palhinha is likelier to sign for Fulham, and that’s a deal which is edging forwards towards completion. There’s no timeframe given by Record for the Nunes deal, and the 23-year-old is currently in Rio de Janeiro visiting family.