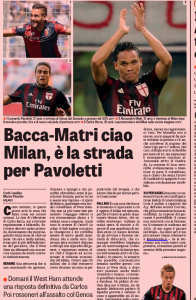 The Carlos Bacca situation is hugely frustrating, for all involved. It comes to something when AC Milan appear desperate to sell their top goalscorer to West Ham, and still can’t push him there despite agreeing a fee.

The transfer has move from dead to alive and back again repeatedly, and Gazzetta dello Sport cover it again on Tuesday.

Gazzetta say the ‘reflection phase’ of Bacca ‘must be very deep’ because he’s been thinking about the situation for over a month now, knowing full well that Milan want to sell him, and have actually agreed a fee with West Ham.

Bacca finds the transfer opportunity, and huge wages on offer, ‘tantalising’, but still won’t give the move his approval.

That’s holding up Milan’s purchases, because they need the Bacca money to move ahead, hence the club getting more than a little irritated.

Bacca, despite previous claims, isn’t said to have completely ruled out West Ham, he’s just delaying things, presumably in the hope someone else comes in.

The latest West Ham deadline, and there have apparently been several, is tomorrow.