On Sunday, the Italian media were hugely confident Nikola Milenkovic would be moving from Fiorentina to West Ham this summer.

Monday also sees confident reports, although it’s made clear nothing has yet been agreed. Fiorentina started out wanting €20m for the central defender, and the Hammers didn’t want to go higher than €15m.

Corriere dello Sport reports the ‘transfer to West Ham is approaching’ and they explain the two clubs will hold further talks on Monday to try and bridge the gap. There’s a suggestion that €17m plus bonuses could do the trick.

Fiorentina are in a difficult position, with Milenkovic having less than a year left on his contract and not being prepared to renew. There has been interest from other clubs, but right now it’s only West Ham making an effort, which provides little leverage for La Viola in negotiations. 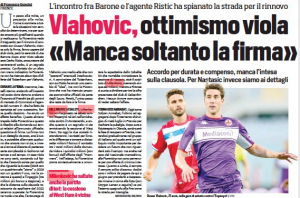 La Repubblica, via Viola News, believe that it’s going to take €18m for Fiorentina to give the green light for the move. The distance between the two clubs is described as ‘minimal’ and the confidence over a deal being done remains.