On Monday, we covered claims from Portugal regarding Manchester United being keen on signing Alex Telles from FC Porto this summer.

In recent days, the Premier League club have been linked with a number of left-backs, and it would appear Ole Gunnar Solskjaer is looking to strengthen the position.

Agents were said to have travelled to England to try and help a move to Manchester United come to a conclusion.

Tuesday’s edition of A Bola carries on the claims, and it’s explained Wolves’ Ruben Vinagre could be a replacement for Telles.

The Porto player’s transfer ‘seems well underway’, explains A Bola, with Manchester United edged out ahead of Sevilla. 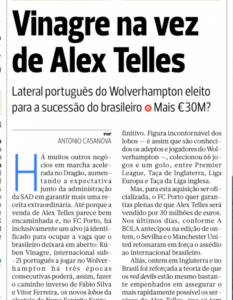 Pushing the idea of a move to Old Trafford, it’s stated the Red Devils are ‘quite committed’ to signing Telles, according to theories coming from Brazil and England.

Porto are holding out for €30m, but given Telles has less than a year left on his contract they may need to bring that figure down.