Nacho Monreal has been linked with a Basque club… and it’s not Athletic Club Bilbao.

Real Sociedad are looking for someone in Monreal’s position and would love to sign a player their rivals have wanted for what seems like forever.

But the problem which has faced Athletic also faces Real. Arsenal don’t want to sell Monreal.

He’s an extremely useful footballer to have around the place and has grown into a more important player the older he’s got. Maturing like a fine Basque wine, the 32 year old doesn’t seem to be surplus to requirements under Unai Emery. 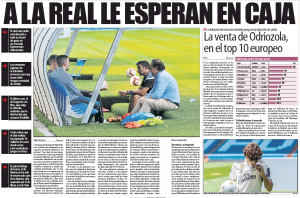 With a contract until June 2019, Monreal can, if he pleases, stay another year with the Gunners and then go and choose his favourite Basque club.

In this respect, Mundo Deportivo report Real Sociedad are seeing their transfer plans ‘running into a wall’, and Arsenal would only consider a sale for an ‘exorbitant offer’.

It’s claimed the La Liga club don’t want to break the bank for a player of Monreal’s age.