For a while, articles have popped up every now and again linking Manchester United with a move for PSG’s Thomas Meunier.

There’s various reasons for it. He’s a supporter of the club and has put that on record more than once. PSG are thought to be open to a sale this summer, after it was thought to be the case last year as well. Manchester United need a right back, and an experienced one, and one with the right attitude would surely help Diogo Dalot progress his own game.

In 2017, the PSG player made no secret of his desire to play in English football and his support of the Old Trafford club: “I’ve always said that one day, I would like to play in the Premier League. I’m very happy in Paris and if I finish my career there, it won’t be a disappointment, far from it. But, if one day, I had to leave Paris, why not?

“On the other side of the Channel, there are the stadiums, the fans, and I’ve never hidden that I’m a big fan of Manchester United, which remains, in my eyes, the real reference in the world of football.”

The English club have been scouting PSG matches this season, and that leads to another mention, this time from Wednesday’s L’Equipe. 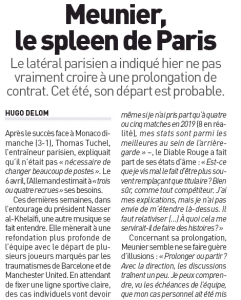 The French newspaper says a transfer is ‘likely’ for the defender this summer, and they estimate his price at €25-30m. With a year of contract left, and PSG needing the money, a little less may be possible.

Manchester United is the only potential destination mentioned, with L’Equipe saying they’ve had an official watch every match Meunier has played in recent months.