Thursday’s edition of L’Equipe has a big transfer special, going through each Ligue 1 club and looking at which players could be bought and sold during the current transfer window.

Premier League clubs naturally play a big part in the claims, with purchases from Ligue 1 being expected every market.

When it comes to covering Lille, the star of the transfer show is Nicolas Pepe, and Liverpool are again pushed forward as a potential destination.

L’Equipe claims a transfer for Pepe is ‘fast approaching’ and Liverpool are ‘very hot’ on the player. Tottenham are also said to be keen, but it’s the Reds who are getting the most coverage.

Liverpool are said to have ‘moved up a gear’ and ‘come close’ to the €80m being demanded by Lille. 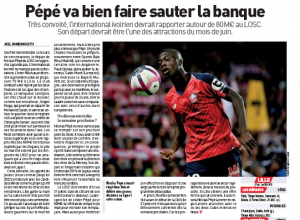 That sounds positive, but it’s worth noting the story also suggests interest from Anfield could be because of a Mohamed Salah exit, and it’s also stated Sadio Mane is interesting Bayern Munich.

Pepe’s agents have this week been speaking to the managers at interested clubs, finding out where the player would fit in their plans.