The German media’s portrayal of Pierre-Emerick Aubameyang is getting tiring.

Yes, he’s treated Borussia Dortmund with disrespect on more than one occasion. Yes, he’s been angling for a transfer for what seems like forever. And, yes, his family and entourage clearly enjoy living it up and spending money.

But it’s now every day and near enough every article which has a dig here or there. This week’s edition of SportBild is of course no different and it’s Auba’s father who is given the kicking.

There’s all kinds of comments suggesting his influence isn’t the best, and it’s stated he’s pushing for the Arsenal transfer, with the repeated insinuation being it’s all about the money on offer.

SportBild say, according to their own information, Aubameyang has a package waiting for him at Arsenal which is worth more than €20m per year, figures similar to what has been 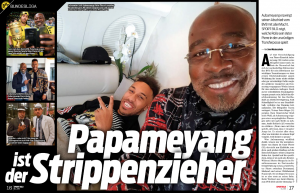 They also say a ‘transfer between €60m and €65m is emerging’ and could be agreed by the end of the week, before making sure to add ‘the father also collects heavily’ from the Arsenal transfer.

Well, he would, what with him representing his son and all that.