Earlier today we covered claims from Turkey that Everton’s Oumar Niasse is a target for Trabzonspor as they to look to bring a forward before the Super Lig transfer deadline.

Trabzonspor have already brought in Alexander Sorloth from Crystal Palace on a two-year loan deal but they are keen to add Niasse to their squad due to their participation in this season’s Europa League.

According to Fotomac, Trabzonspor’s transfer committee are now in England to hold transfer talks with Everton and they are hoping they can sign Niasse this week. It was previously claimed the Super Lig side are closing in on a deal for the player.

Karadeniz Firtinasi will face Sparta Prague on Thursday in the Europa League and Fotomac say the Turkish club are looking to confirm Niasse’s arrival after that game. 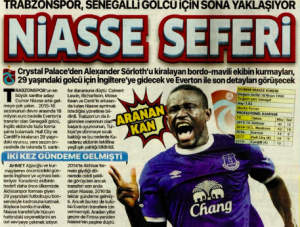 If they can get the transfer over the line this week the Senegalese striker would be in line to face Kasimpasa next Sunday.

It seems Niasse will have to move on before the European transfer window closes at the end of the month after falling out of favour under Marco Silva.