Until Odsonne Edouard signs a deal with Celtic or moves elsewhere, there’s going to be conflicting reports about the player’s future.

One week he’s edged closer to signing for Brendan Rodgers’ side permanently, and then the next he’s pulled back a little, before being pushed forward again.

Tuesday’s edition of L’Equipe brings a little positivity for Celtic’s chances of keeping the youngster. The French newspaper have a big transfer special, looking at potential business for all of Ligue 1’s clubs this summer. 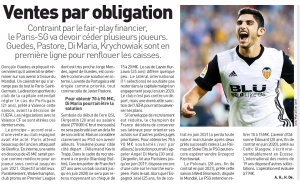 A big part of that is obviously PSG, with the champions needing to sell some players and also looking for additions of value in this market. Edouard’s potential move to Celtic isn’t really the biggest of deals and L’Equipe just give it a few words.

But those are positive words. The 20 year old will ‘probably’ be returning to Scotland despite interest from elsewhere, according to the French claims, and the potential transfer is valued at around €7m.