The Portuguese media loves it when a player from the local league is linked to any Premier League club.

That’s what happened today. With The Sun reporting Brighton & Hove Albion, Newcastle United, Swansea City and West Ham are all be interested in Benfica’s Franco Cervi. the story has blown up in Portugal.

Newspapers Correio da Manhã, Jornal de Notícias, Diário de Notícias, O Jogo, Record and A Bola have all covered the story. But it’s only the latter that seems to have gone after the rumour. 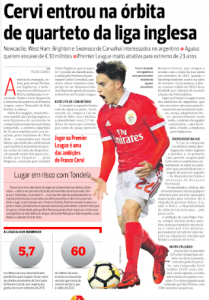 A Bola claims they were able to confirm the news, and the Premier League clubs are indeed interested in the midfielder. The list is said to be ‘headed’ by Rafael Benitez’s Newcastle United.

For now, there only seems to be an interest, and none of the clubs have advanced with a bid so far.

Regarding Cervi’s availability, A Bola claims Benfica have already turned down approaches in the past few months, but things may change a little when the summer transfer market comes. Even though the player is protected by a €60m release clause, Benfica would be demanding €30m to let him go.

Now we wait and see if it’s Brighton, Newcastle, Swansea or West Ham that will bid first.

Swansea’s interest is being underlined as down to Carlos Carvalhal, whilst West Ham are already known to look in Portugal for options.