The 27 year old hasn’t been able to breakthrough for the Catalan club, despite having chances at various points over his career, and has been sent out on loan to Celta Vigo, twice, and Inter Milan.

With a contract set to expire in June 2021, Sport report the midfielder is keen for a move to English football. Just like his brother Thiago, Rafinha wants to give the Premier League a try.

Going over interest, Sport state a move to Arsenal or West Ham isn’t ruled out, and Everton is also pushed forward as an option.

Lazio are thought to be keen, but such is Rafinha’s desire to move to England, they’re behind the other clubs right now. 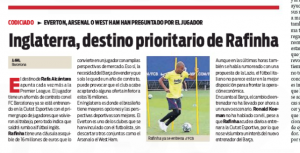 There’s no further information given from Sport about West Ham, Arsenal and Everton interest, although it’s unlikely they’ve plucked the names from thin air.

It could well be Rafinha has agents searching out options, and that those three clubs are considered reasonable destinations.