Despite making it very clear on transfer deadline day that he wanted to leave the King Power Stadium, Leonardo Ulloa is having to finish the season at Leicester.

Barely playing under Claudio Ranieri, the Italian’s dismissal has done very little to improve the Argentinean striker’s situation at the Premier League champions, and a move away in the summer is likely to take place.

Coming on late in the 4-2 loss against Everton, Ulloa came very close to scoring with his first touch of the ball, a header from a corner, instantly highlighting what he can bring to a team if he plays regularly. 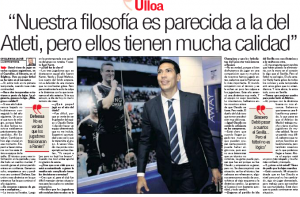 Ahead of this week’s Champions League clash against Diego Simeone’s Atlético Madrid, the Leicester forward was interviewed by AS in Spain, and asked at the end what his plans were for the future.

He said: “It’s tough. My situation on a personal level since Claudio left hasn’t changed. I’m still not playing a lot, but I’m working in order to get opportunities. It’s clear that I cannot continue with the current situation.”

Arriving from Brighton in 2014 for just over £8.5m, the now 30-year-old has made 19 appearances for Leicester’s first-team this season, starting only two of those, scoring just one goal.

Since his arrival, Ulloa has scored 20 goals in 92 appearances for the Foxes, and we’d be surprised if at least one Premier League side gambled on a proven goalscorer who only has one year left on his contract come the summer.

Either that, or a return to Spain, where he spent four and a half years with both Castellón and UD Almería.