Links between Tottenham and Antonio Barreca popped up several times in the Italian media last week.

First it was claimed Tottenham are showing an interest in the 23 year old defender, and could make an early offer to Torino to try and get in there before the competition.

Then it was claimed by Turin newspaper Tuttosport that Tottenham had offered €17m to €18m for the player, which at the time wasn’t considered enough.

Just three days later and the situation seems to be different, with Tuttosport now claiming Torino value Barreca at €18m. Tottenham’s offer obviously pretty much meets that figure, but on Sunday Tuttosport seem to row back from that claim, now saying Spurs have made contact, and not mentioning the offer they’d previously reported. 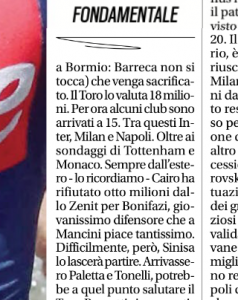 Other clubs are credited with effort, with the Milan sides and Napoli all said to have reached around €15m with their offers. Whereas AS Monaco, who on the 27th were reported as having made an €18m offer, are now put in with Tottenham as having made contact.

A bit of a transfer mess.

Mauricio Pochettino’s side aren’t crying out for a player like Barreca, a left back, and there’s surely other priorities for Tottenham to look at first.