Tottenham, as things stand, are currently without a first-team manager following their parting of ways with José Mourinho.

Ryan Mason has been chucked in at the deep to see out the current season, but a new name will be appointed in the coming months, and many are already circling.

One who has gone somewhat under the radar is Roberto Martínez, with only a handful of articles looking at the Spanish manager’s situation following the 2020 Euros to be played this summer.

It’s expected that he will leave his job in order to return to club football, and it was reported last week that Pini Zahavi had been mandated to try and find him a new job.

That’s when it was made clear Spurs were ‘the most credible track’ for Martínez, and the fact his new agent was close to Daniel Levy made it even more likely for him to be considered. 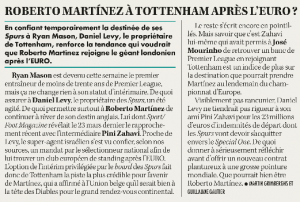 Well, Sport/Foot Magazine publish a similar article in their magazine this week, although there’s an update at the end worth mentioning.

It’s said that while Zahavi was one of the reasons he had to pay José Mourinho €23m to sack him, Levy ‘isn’t resentful’ about it and ‘doesn’t hold it against him’.

That being said, he might think twice about giving the next candidate such a ‘lavish’ contract, who, Sport/Foot say, ‘could very well be Roberto Martínez.