Home Europe Tottenham could be working ‘under the radar’ for signing – Spurs effort...
SHARE

Nahitan Nández has been wanting to leave Cagliari in the summer transfer window and with Tottenham Hotspur, Inter Milan and Atalanta among the suitors, he hasn’t managed to get the move he had long hoped for.

It’s claimed the Serie A winners are out of the race, but they and Spurs could ‘work under the radar’ to sign the 25-year-old.

The north London club perhaps have the financial muscle to meet the demands set by Cagliari president Tommaso Giulini, but what’s certain is no club will pay his €36m release clause. 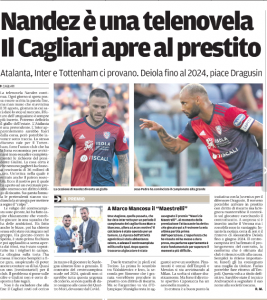 Therefore, Cagliari have opened the possibility of letting the player leave on an ‘onerous loan with the right / obligation of redemption’.

As per the report, the suitors are studying this formula.

The Uruguay international, for his part, has his suitcase ready to make a move elsewhere.

Tottenham are trying to sign him, but the feeling from the report is Spurs’ efforts seem to be slipping away to sign Nández.