Following João Palinha’s good performances for Portugal in the Euros, his involvement in even more transfer rumours is almost inevitable this summer.

That’s why his club Sporting are sending a message through newspaper Record today, as a story claims the Lions do not plan to sell the midfielder in this transfer window.

The outlet writes there are a few English clubs interested in him, including Tottenham Hotspur and Wolverhampton Wanderers, but it’ll be hard to take the 26-year-old out of Lisbon.

Palhinha is currently protected by a release clause of €60m, and that’s how much Sporting are expected to demand for a summer sale, with their stance being ‘well expressed’. 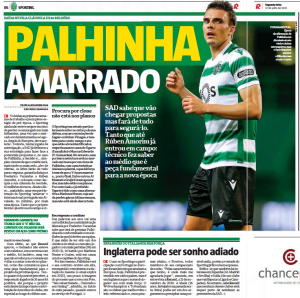 Record writes that Tottenham and Wolves are the clubs who ‘best have’ the midfielder as a target, and on a lower level, there’s the competition from Everton as well.

They highlight the fact that Palhinha previously revealed his dream of playing in the Premier League, even though there’s still the interest from Atletico Madrid, Sevilla and an unnamed Italian club who’ll be in the Champions League next season.

However, the newspaper points out that none of those sides are close to ‘satisfying’ Sporting with a good offer, leaving the door open for the likes of Tottenham and Wolverhampton Wanderers.