It may have been expected that Rachid Ghezzal would be a bigger name in the transfer rumour mill right now. The Lyon player has a contract ending in the summer and can therefore rock up somewhere free of charge.

Part of the reason for the lack of hype is likely down to Ghezzal not being quite as good at Lyon this season as last, but interested clubs may be prepared to gloss over that, believing it could be because his future is in doubt, and concentrate on the fact that he’ll be free.

In November it was reported in France that Tottenham and West Ham had joined other interested clubs in a pursuit of Ghezzal. Both clubs were said to have initiated talks on a potential move, and it didn’t come as a greats surprise.

Mauricio Pochettino and Slaven Bilic have both looked towards France’s Ligue 1 for recruits in recent years, and Ghezzal’s situation makes him something of an obvious target. Pochettino has tried to get an ideal wide-man from France, with Clinton N’Jie trying and now Georges-Kevin N’Koudou being something of an invisible man.

With there being doubts over Sofiane Feghouli’s future during the January window, there’s every chance Bilic could be looking at a replacement.

Ghezzal is keen on having European football next season, not wanting to take a step backwards, and that would give Tottenham an advantage over West Ham. But that was in November and since then there’s hasn’t been a huge growing of interest, so the player may need to change his priorities. 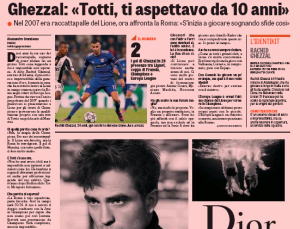 Speaking to today’s edition of Gazzetta dello Sport, Ghezzal was asked if he’s already chosen his new destination: “No, but the proposals are being studied. I want an ambitious project, in France or abroad. Maybe I have more affinity with Spanish football, but I do not rule out the Premier League or Serie A, where my brother Kader played, who now takes care of all these things.”

Ghezzal is happy to make it known he’s open to offers, which would look to be a hint he’d appreciate more of them. Tottenham and West Ham are no doubt keeping an eye on the situation, and whilst improved form would encourage their interest, it would also bring more competition.