Tottenham have again been mentioned by L’Equipe as one of the clubs who could potentially sign Adrien Rabiot either in the January window or next summer when he’s a free agent.

Spurs are said to be ‘watching closely’ for a potential swoop, whilst Barcelona and Liverpool have taken more concrete steps according to the French newspaper.

It’s explained that PSG have been putting the feelers out about an offer in the January window, wanting to get some cash now rather than see the player leave for nothing when his contract expires in June.

Previously it’s been claimed they’d look towards clubs they have a good relationship with, and Tottenham have been considered as one of those. 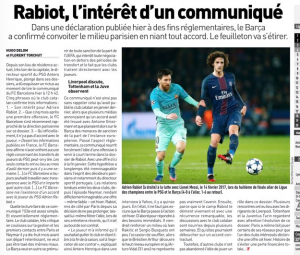 Whilst L’Equipe don’t state it, there’s every chance this is PSG seeing if the Premier League club fancy throwing in an offer and trying to convince the player.

Having signed Lucas Moura and Serge Aurier in recent windows, both deals which suited all parties at the time, it would be no surprise if that’s been the route taken.

Player ‘in the sights’ of Tottenham – ‘Decisive’ time coming, Spurs interest backed up