On Thursday, Estadio Deportivo reported that Tottenham Hotspur are a ‘prominent name on the table’ for Jules Koundé.

Friday’s edition of AS explains Sevilla must sell one of their stars in order to make new signings, and the defender’s exit can ‘unlock’ incomings for next season.

Claims made in England about Spurs’ willingness to table an offer around €55-60m to sign the defender are highlighted by the newspaper, which then provides the stance maintained by the La Liga side and the 22-year-old.

At the Spanish club, they expect the offer to be around €70m to give their ‘arm to twist’. In addition to this, the north London club are ‘not one of the player’s favourable destinations’.

Marca also made similar claims and lead their report by stating Julen Lopetegui’s side have identified the Frenchman and Youssef En-Nesyri as the ‘two most important’ possible sales of this window to improve their economic conditions.

Tottenham get a mention and it’s claimed Nuno Espírito Santo’s side ‘want to propose a more realistic negotiation’, a cheaper price, and Sevilla would be willing to sit down with the Premier League club. 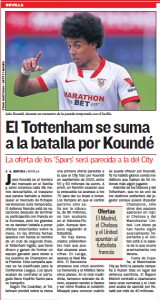 The ‘problem’, however, is that Koundé wants to ‘take a sporting leap’ and a move to Spurs will not help him achieve it since they are not playing in the Champions League next season.

Both AS and Marca discuss Spurs’ willingness to sign the France international, but he isn’t in favour of joining Tottenham.