Following claims from Portuguese TV, it’s finally time for local newspapers to say something regarding Tottenham Hotspur and Haris Seferovic.

Outlet Record brings a story today saying Spurs are interested in the Benfica striker, and are now trying to sign him on a loan deal.

It’s claimed that Tottenham have failed in signing many attacking targets this summer, and since the ‘responsible’ people at the club don’t let José Mourinho go to the market as strong as he wishes to, Seferovic became an alternative.

It’s said Spurs are willing to get the striker on loan with a possible option to buy at the end of the season. And Benfica don’t rule it out. First because they’d get a fee from the temporary move, and they’d also stop paying the player’s wages. Something similar was done with Gedson Fernandes last season. 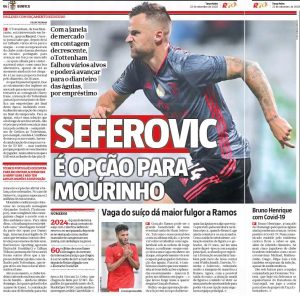 Record lists a few attackers who Tottenham reportedly failed to sign this summer. That includes Alexander Sorloth, Danny Ings, Bas Dost and Callum Wilson. Just like Seferovic, they’re all pointed out as alternatives Mourinho would like to have for Harry Kane.

Tottenham Hotspur’s interest in Haris Seferovic had also been reported by TVI24 last night. They said the club tried to sign him back in January on a permanent deal, and now went back for him for a loan move. The outlet reported Benfica striker Carlos Vinícius is also an option for Spurs.

“I would’ve liked him to be my manager” – Rangers favourite heaps praise on Steven Gerrard, recalls ‘incredible memories’

“I would’ve liked him to be my manager” – Rangers favourite...