Home Europe Tottenham have transfer package all worked out, and are offering ‘golden contract’...
SHARE

AS Roma are heading for another fall out with their fans, with Corriere dello Sport reporting Nicolo Zaniolo could be set to leave the club, and it’s all the doing of the Serie A side themselves.

Rather than declaring the 20 year old as not for sale, the insinuation is they’re ready to cash in. Tottenham have been linked repeatedly, along with Juventus, and on Sunday interest from both of those clubs is covered.

Tottenham would be offering Toby Alderweireld plus €25m, so a total package which Spurs believe is worth €45m, and that amount could work for Roma.

Zaniolo himself would receive a ‘golden contract’ from the Premier League club, which would last six seasons.

It’s claimed Franco Baldini will again meet with Tottenham, on Monday or ‘at the latest Tuesday’, to try and work out an agreement for both players. 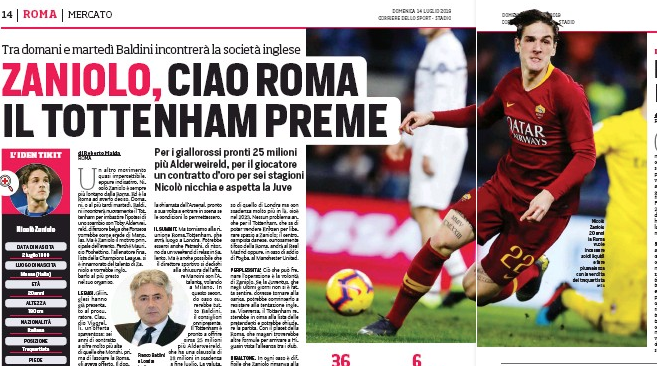 However, it’s thought Juventus, despite having more midfielders than any one club really needs, are lurking and could swoop to snatch the player, who would likely look well on staying in Italy.

There’s been some disagreement in the Italian sport media over whether Baldini has been meeting Tottenham just to talk about Alderweireld, or whether Zaniolo is included, Corriere dello Sport clearly believe it’s the latter.