Mauricio Pochettino has been showing plenty of frustratio lately, his displeasure at Tottenham’s lack of transfers is evident for all to see, and it may be about to grow further.

ABC Sevilla are reporting that Spurs negotiations with Real Betis for midfielder Giovani Lo Celso have hit the buffers and the Spanish club have now called an end to proceedings.

Tottenham and Betis have been locked in negotiations for the best part of two months, with Pochettino having made it clear that he wanted his compatriot to move to White Hart Lane this summer.

The two clubs have failed to reach an agreement, though, with Betis holding out for €75m and Spurs trying to knock them down from that asking price. In fact, it’s been widely reported they only want to pay €50m.

Betis have seemingly had enough of that now, according to these claims from Seville, and ABC say they broke off negotiations with the Premier League club on Sunday. They have so far rejected every Tottenham proposal, and the newspaper says they’re ‘upset’ with Spurs attitude and that of the player. 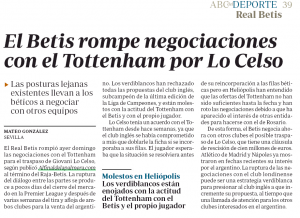 He’s had an agreement with Spurs for weeks, after they offered to double his wages, and thought the deal would be done before he returned from the Copa America, but Spurs’ offers haven’t satisfied Betis, and they’ve now ended them completely to negotiate with other clubs.

ABC say Atletico Madrid and Napoli are both showing an interest in Lo Celso, so they are focusing on talking to those two clubs instead.

It’s suggested that this could be a strategy from Betis to make Tottenham up their bid and create an auction in the process. Either way, it seems Betis have finally had enough of Daniel Levy’s bargaining and decided to call his bluff.

It will be interesting to see how he responds.

This all flies in the face of some others claims that a deal is close, but the story of Tottenham interest started in Seville and it’s probably worth taking notice of what they say now.