The race for Sporting midfielder João Palhinha gets a new chapter today.

Following a great season with the Lions, the 25-year-old has been linked to several clubs, including Tottenham Hotspur, who were said to have initiated talks for his signing last week.

Now newspaper A Bola features a story detailing the long list of clubs who are set to fight for the player, who’d been defending Portugal in the Euros as well.

The news is that Atalanta have now joined the likes of Tottenham, Leicester City, Wolverhampton Wanderers, Atletico Madrid, Sevilla and Napoli in the pursuit for Palhinha. 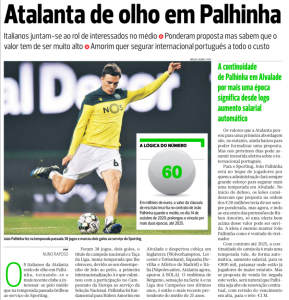 A Bola writes that not long ago, Sporting thought that an offer of €30m would be considered by the club.

And yet now, following the interest from several clubs and his performances in Euros, added to the manager’s wish to keep him, only a bid ‘way over’ that amount will be listened to by the Lions.

Palhinha is protected by a release clause of €60m, and when reporting Tottenham’s interest last week, newspaper Record had claimed that Spurs would need to pay that much to sign the midfielder.