Since Tottenham Hotspur’s chase for Sporting midfielder João Palhinha started getting some serious attention from the sports media this week, the Portuguese press has been making it clear there’s a long way to go for Spurs to convince the Lisbon club.

However, regardless of how close the clubs are to a deal, it now looks like Sporting are getting ready in case the 26-year-old leaves Alvalade this summer.

Newspaper A Bola features a story saying that Manuel Ugarte, who’s been signed from Famalicão this summer, is now having a quicker process of adaptation as he may be needed in the starting team sooner than expected.

Even though there’s no guarantee Palhinha will leave the club, Sporting are preparing the new player just in case he needs to be thrown into the team at the start of the season. 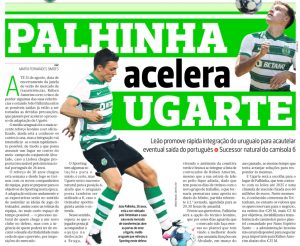 A Bola once again claims that Tottenham’s interest in Palhinha is ‘known’, but also highlights that Spurs are still far from a deal for the midfielder.

It’s said Nuno Espírito Santo’s side ‘reserved’ around €20m, plus in €5 in bonuses, for the transfer. That’s still not enough to even engage in talks for him, since Sporting will not negotiate the player for less than €35m.