RB Leipzig coach Julian Nagelsmann could be tempted by a move to Tottenham, if it were offered this summer

That’s according to SportBILD, who say it would be interesting to see the manager’s stance should a big job become available in the near future.

Nagelsmann has been a huge hit at Leipzig since his arrival back in 2019, leading the club to the Champions League semi-finals last year.

He’s already been linked with the major jobs in Europe on more than one occasion, with many believing he is the next big-name manager in the making.

His contract at Leipzig doesn’t run out until 2023 and SportBild explain that doesn’t contain an exit clause, so the German side are planning to keep the 33-year-old until the end of it.

However, they also say that it remains to be seen how ‘great the desire’ for a change would be should a top job in Europe become available, naming the likes of Bayern, Tottenham, Real Madrid, Liverpool and Manchester United as possible destinations.

The insinuation is that, at this moment in time, it’s not known how much Nagelsmann would want the move, but there is certainly a sense that he could push for it if it was there. 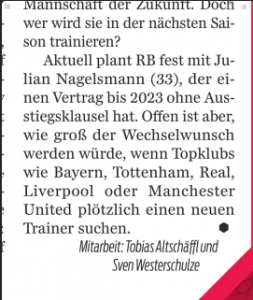 Of course, for that to happen at Tottenham would mean them sacking Mourinho first, which doesn’t appear to be on the horizon just yet.

However, if things continue to go downhill for the Portuguese boss at the club, that could become an eventuality sooner rather than later.

In such a circumstance, Nagelsmann would likely be towards the top of the list and, if this report is to be believed, that could be an avenue worth exploring.