At just 18 years of age, Benoit Badiashile got thrown in at the deepest of ends at Monaco this season.

The young centre-back ended up starting most games for the Ligue 1 side from November 11th (a 4-0 loss to PSG) onwards after a terrible start under Leonardo Jardim, which didn’t exactly get any better when Thierry Henry took over.

Eventually, the Portuguese manager returned and saved them from relegation, and Badiashile more or less stayed in the first-team, which caught the eye of Tottenham.

Always attentive as to what goes on around Europe, Spurs are said to be ‘taking an interest’ in the youngster, according to France Football, who is contracted to the principality club until 2021. 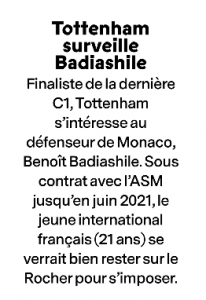 However, Badiashile is said to prefer a stay at his current club, where he wants to impose himself as a regular starter going forward, perhaps knowing his path would be blocked in London with players such as Toby Alderweireld and Davinson Sanchez ahead of him.

It appears France Football got the ages mixed up with his older brother, Loic Badiashile, a 21-year-old goalkeeper also at Monaco, but they do specify they are talking about Benoit, a defender.