Spurs are said to have contacted the Lisbon club to find out the conditions for a possible summer signing. They’re not the only club keen, with Everton, Atletico Madrid and Sevilla also said to be in the picture for the player’s purchase.

Record state that whilst Everton are interested in Palhinha, they have ‘other priorities’, namely his club team mate Matheus Nunes.

Palhinha is 25-years-of-age and currently away with the Portugal squad at Euro 2020. He came on for the second half against France earlier this week and was one of his country’s best performers in the match.

He played a defensive midfield role with Sporting last season, totalling 38 appearances across all competitions. 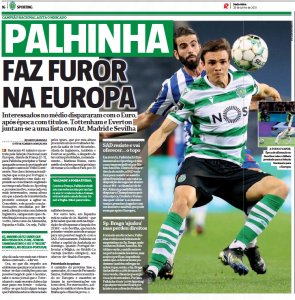 According to Record, Tottenham are latest club to come forward for the player, but there’s no information on Spurs being in any serious talks to make the signing happen.

Atletico Madrid are said to have made it known they won’t go beyond €25m, and Sevilla would need to sell before they can make a move.