Toby Alderweireld’s contract situation at Tottenham is still a big talking point in Belgium, and the fact the 28-year-old has yet to extend his contract at Wembley is becoming a bit of a worry.

Left out of Mauricio Pochettino’s squad for the North London derby, the centre-back now hasn’t travelled to Turin to face Juventus in the Champions League, raising a few eyebrows.

Het Belang Van Limburg have a theory, and they believe this could all be because of the contract renewal talks (currently very quiet) since Alderweireld is ‘fully fit’, meaning it isn’t anything to do with rest or injury.

The Belgian newspaper suggest “Tottenham tries to play the game hard” when it comes to negotiating, led by a ‘tough’ Daniel Levy, and the centre-back is the ‘victim of a typical piece of bluff poker from the British businessman’.

At the heart of all of this is the option to extend Alderweireld’s current deal to 2020, which, if lifted, will also activate a release clause, meaning he can leave for a fixed amount. 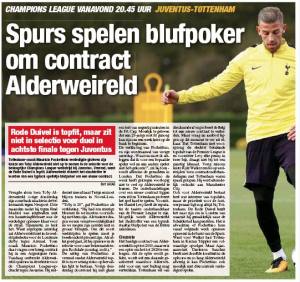 This is something the club want to get rid of, hence their desire to renew him, but the two parties are ‘currently too far apart’.

They write: “The fact that Tottenham is by far the worst paying ‘top’ club in the Premier League and Levy ‘bites two pennies’ doesn’t contribute to a favourable climate”.

Despite all this, and the interest from other big clubs, Alderweireld’s priority continues to be an extended stay at Tottenham, having a good time in London, where he can easily commute back to Belgium from.

His absence from squads means Pochettino isn’t able to play a three at the back formation, and Davinson Sanchez, as great as he is, ‘doesn’t provide the same quality in the build-up’ as his teammate.

We’ll have to see what comes of this, but the longer he remains absent, the more worked up the Belgian press are going to get.