Home Europe Tottenham star ‘glad’ his ‘fantastic’ teammate is still at the club after...
SHARE

On August 6th, Belgian newspaper Het Laatste Nieuws reported that Toby Alderweireld wanted to leave Tottenham Hotspur and Manchester United were one of the clubs interested in securing his services.

The former Southampton man was hopeful the Red Devils could find an agreement with the north London club. However, the deal did not take shape and the defender was forced to continue with his current employer.

His contract with Spurs runs down in 2019 and Mauricio Pochettino’s side have an option to extend his deal by a further year. If they decide to take up that option, the centre-back will have a release clause of €28m.

The Belgium international made his first appearance of the season in his side’s 3-1 victory over Fulham last Saturday. His compatriot, Jan Vertonghen has expressed his delight that Alderweireld is still at the club and hailed the 29-year-old as a “fantastic player”, just like other players in Tottenham squad. 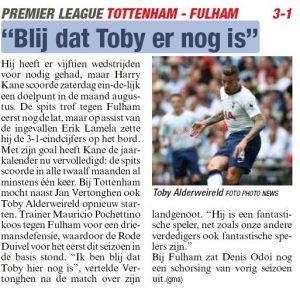 “I am glad that Toby still is there [at Tottenham]. He is a fantastic player, just like our other defenders, and also other players,” Vertonghen was quoted as saying by Het Belang van Limburg.