Already the record holder of the amount of caps as captain of the France national team, Tottenham goalkeeper Hugo Lloris is about to enter the record books once again.

The former Lyon man, now a talisman at White Hart Lane, will, when he plays on Tuesday night against Spain in a friendly, become the tied-most capped goalkeeper for France alongside Fabien Barthez with 87.

Only 30, the Tottenham captain is destined to surpass the former Manchester United goalkeeper, and could, if he continues to be France’s number one goalkeeper for the next four years or so, enter the top three of most capped players for France. 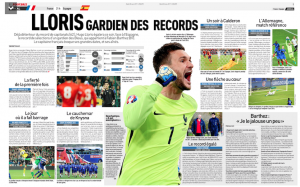 Beating Barthez’s record was actually a challenge set by the ex-France goalkeeper himself, as explained by Lloris to L’Equipe.

He said: “Fabien, he’s the number one. To have 50 caps like Joel Bats and then 87 like Fabien, during France-Spain, they’re just numbers, but at the same time, it’s something else. They’re important meetings. During our first chat, Fabien told me: “You need to beat my record”. That’s class, that’s lordly. As for the record itself, I’m struggling to stop here, especially at 30.”

There are very few (Pogba perhaps?) capable of coming close to Lilian Thuram’s record of 142 caps.

Described as ‘exemplary’ by his current national team manager, Didier Deschamps, there are no doubts that Lloris deserves to be in France’s record books, as few have taken their role as seriously as he has.

Tottenham fans can vouch for that, he does his job exceptionally well.