Home Europe ‘Above all Tottenham’ – Spurs remain active for Romero alternative, yet to...
SHARE

With all their attempts to sign Cristian Romero from Atalanta, it’s clear the Argentine is Tottenham’s first choice to bolster their defence.

However, every club has a back up plan, and in Spurs’ case, one of those appears to be Nikola Milenkovic, currently at Fiorentina.

The defender is out of contract next year, meaning he will be cheap compared to Romero, but until the deal for the Atalanta star falls through completely, it appears the north London side aren’t ready to make a move.

That’s according to La Nazione, who state the player is ‘followed’ by many clubs, ‘above all Tottenham’, but no offer has been made yet. 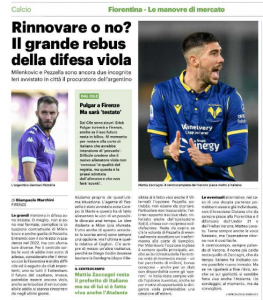 It’s explained that, as things stand, the ‘English option’ i.e. Spurs, is the main one, but it’s also pointed out that Fiorentina’s requests remain ‘hefty’, even for a club from the Premier League.

The price itself isn’t stated, but recent reports have suggested €15m or so would be needed to sign the Serbian.

While that might not be much on paper, it’s worth remembering Milenkovic’s contract status and the fact he is currently at a club still reeling from a very nervy campaign where relegation was far too close.