That’s what Tuttosport report today, following up claims elsewhere in Italy about Spurs efforts to get Jose Mourinho a new centre-back.

Corriere Dello Sport reported earlier today that Tottenham had not made an official offer for Skriniar as yet, instead holding ‘exchanges of information’ with Inter Milan over him.

The newspaper explained that they had hoped to pay no more than €35m, but the Italians are looking for €50m, so there was plenty of work to be done if the transfer is to happen.

They also speculated that a €40m bid with various bonuses could instead arrive but did not say whether that would be enough to convince Inter.

Tuttosport now say that €40m would still be considered low given that they paid €27m for Christian Eriksen in January and he only had a year left on his deal.

However, at that figure, there would be a way to ‘find a mediation’ with Tottenham, and that is because of the good relationship Daniel Levy has with Inter’s CEO Guiseppe Marotta. 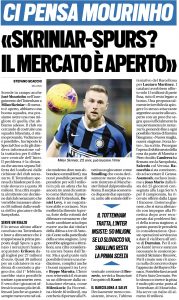 Skriniar, for his part, is keen on the move after falling out of favour under Antonio Conte and Levy is willing to bring him to Tottenham, with it explained the Spurs chairman ‘will not easily let go of the grip’.

In other words, he won’t give up trying to get him without a fight.

At the moment, though, there is a difference between the two clubs and that will have to be resolved before there’s any progress.