The 26-year-old, who was linked with a move to Spurs in the last window, is still with the Bundesliga side.

This week’s edition of SportBild looks at the contract situations of Leipzig players, including Sabitzer and Emil Forsberg.

The duo have contracts until 2022 and earn an annual salary of €6m. As per the report, they are ‘right at the top’ in the list of highest earns at the German club.

Leipzig sporting director Markus Krösche doesn’t sound like he wants to hand out new bumper deals: “I’m not a fan of the fact that a player earns significantly more than others who are on the same level with him in the squad.”

SportBild have interpreted Krösche’s comments and suggest the Austria international and Forsberg are unlikely to receive a raise in their salary, especially during the coronavirus crisis. The discussions over new deals could drag on until the next summer. 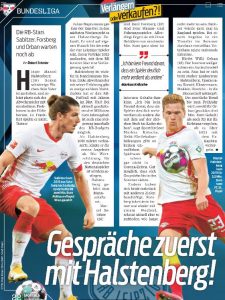 It’s claimed Sabitzer ‘would like to play in England one day’ and with ‘one offer’, a move after this season remains a possibility.

José Mourinho’s side get a mention as the magazine states Tottenham have made their interest known ‘several times’, and a transfer is ‘conceivable’.