Joining Lazio from Sevilla back in 2018, Joaquín Correa enjoyed himself in his first season in Italy.

The now 25-year-old scored nine goals and assisted seven times in 44 appearances in all competitions under Simone Inzaghi, which attracted some attention from clubs around Europe.

At least, that’s what Il Tempo state, claiming the likes of Napoli, Tottenham, Atlético Madrid and Milan all expressed some desire to sign the player in the summer.

Carlo Ancelotti’s side reportedly put €40m on the table, which clearly wasn’t enough, while Spurs and the La Liga club had ‘concrete interest’ in the Argentine, who would have provided added support up front in Mauricio Pochettino’s squad.

While not an out and out striker, Correa would have perhaps helped fill some of the void left by Christian Eriksen’s departure had the Dane left in the summer, playing behind Harry Kane and providing an extra threat in a team that can look one dimensional at times. 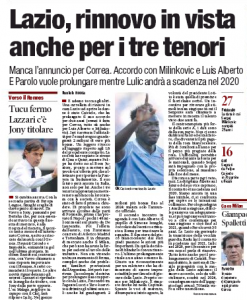 They mention an offer from abroad, although there are no details, so we aren’t going to jump to unnecessary conclusions and say one definitely arrived from Tottenham.

In light of this interest, a new contract is on the way for Correa, even if his current deal takes him to 2023, and the announcement is expected soon.

They highly rate what he brings to the team, and if they can keep him for longer (or get more money down the line), then that’s what they’ll do.