Home Premier League Chelsea Tottenham could be set to sign Plan B for half the price...
SHARE

That’s according to Marca on Friday and their report mainly focuses on the Blues wanting to sign Sevilla star Jules Koundé.

Thomas Tuchel’s side could offer one of their players to the Spanish club to lower the 22-year-old’s price tag.

According to the report, there could be another movement with Zouma to Tottenham a transfer that can be the ‘key to the negotiations’ for Koundé.

Spurs looked at Julen Lopetegui’s man, but his refusal to join them saw the north London club shift their focus to Romero.

The Argentine is their ‘main’ target, but the Serie A side ‘remain firm’ and are demanding about €55m to let the defender leave this summer.

‘In the tug of war’ between Tottenham and Atalanta, Zouma has emerged as Plan B for Nuno Espírito Santo’s side. 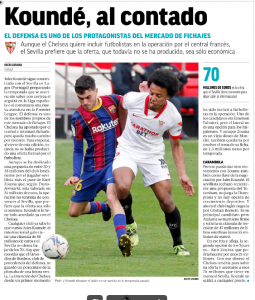 Marca state a deal for Zouma can be concluded for €25m, which is less than half the price needed to acquire Romero’s services.

The Frenchman’s move to Spurs would bring the former Bordeaux man closer to the Blues, as Chelsea can use funds from Zouma’s sale to land Koundé.