Turkish newspaper Sozcu report Tottenham Hotspur were due to hold talks with Fenerbache with regards to signing Vedat Muriqi but this is now in limbo because of the Coronavirus outbreak.

It’s reported Spurs and Fener were planning to hold talks over Muriqi after Kosovo’s Euro 2020 playoff game against Northern Macedonia, but after the game was cancelled due to the pandemic, transfer negotiations were put on hold.

Sozcu claim transfer talks with Tottenham will not take place until the virus is under control and Fenerbahce are still hoping to sell him for a ‘decent fee’ in order to fund incoming transfers for next season. 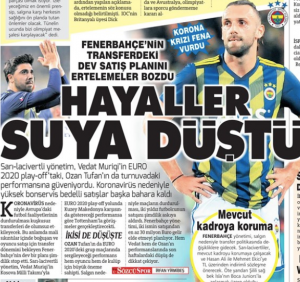 The 25 year old joined Fenerbahce at the start of the season from Caykur Rizespor and has impressed with his performances.

He’s been heavily linked with a move to other Premier League clubs in recent months with Leicester City also reported to be interested.

Muriqi’s contract with Fenerbahce will expire at the end of June 2023.