Home Europe Tottenham could be set for ‘exchange of loans’ – Spurs get striker,...
SHARE

Monday’s edition of Corriere dello Sport brings the possibility of Jan Vertonghen to Napoli back to the table.

There’s nothing especially concrete or urgent, it’s claimed the Serie A club speak frequently with the defender’s entourage, and there’s been ‘small openings’ over a potential move.

Vertonghen isn’t considered a priority for Napoli right now, but they’d be ‘ready to accelerate’ if the opportunity and need arises.

Over at La Repubblica, they also have a small snippet on the Belgian international, but this one is a little different. There could be an ‘exchange of loans’ because Tottenham are said to have asked about signing Llorente.

The Spanish striker left Spurs on a free transfer in the summer, however, he hasn’t enjoyed the success he may have expected in Italy. Llorente, who turns 35 years of age next month, has a contract with Napoli until June 2021. 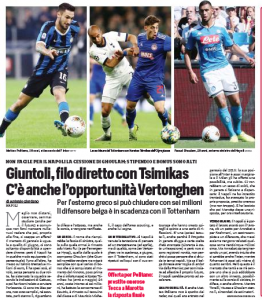 Vertonghen’s contract expires in the summer, so what would happen in that regard isn’t clear.

If Napoli want the 32 year old defender, and Spurs want Llorente back then there may be the basis of some sort of agreement as the window goes on.