If there’s one player that appears to well and truly be on Tottenham’s list for January, it’s Dejan Kulusevski.

The Swede is out of favour at Juventus these days under Max Allegri, and finds himself in the middle of a transfer rumour mill tug of war between Spurs and Arsenal.

Gazzetta dello Sport on Friday, however, believe it’s Tottenham who might have the upper hand, as they are ‘serious’ about signing the forward.

While ‘we are not yet at the time of offers’, we are at one of ‘expressions of interest’.

Fabio Paratici, it’s pointed out, doesn’t have to ask about the player, since he’s the one who bought him for Juventus in the first place, and ‘he knows everything about Kulusevski and his contract’. 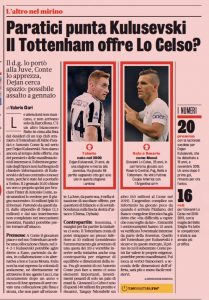 Antonio Conte, down his end, ‘likes the player’ and he would have a ‘clear position’ for him in the 3-4-2-1, ‘behind Kane, starting from the right’.

As for Kulusevski, he might have ‘never expressed the desire to leave, either directly or through his agent’, but he would have been more established at Juventus by now, a year and a half after his arrival.

Over at Tottenham, the plan is to ‘be able to snatch a price of less than €30m’ and they ‘would also like to include a counterpart in the negotiation for the needs of balance and size of the squad’.

It’s pointed out that ‘among the men Conte can do without’ are ‘important elements’ Giovanni Lo Celso and Tanguy Ndombélé.

First, though, ‘any interest for them from Juventus should be checked’, but ‘that of Tottenham for Kulusevski is sure’.

After that, it all comes down to ‘the size of the offer’, because depending on that, ‘it will be more or less easy to resist’.