Claims around Tottenham Hotspur and Nicolo Zaniolo continue in the Italian media.

Spurs interest has been claimed for well over a month now, and Juventus are also thought to be keen on the AS Roma midfielder. The latter is the angle Turin newspaper Tuttosport leads with on Wednesday.

It’s thought the Italian champions are ‘pressing’ for the player’s signing, but facing some delays from those who represent him.

Tuttosport states ‘Tottenham are serious’ and says Zaniolo’s entourage have a ‘sumptuous offer’ for the Premier League club.

AS Roma missed out on the Champions League for next season, which has a serious 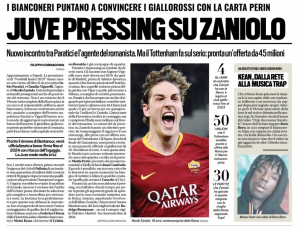 impact on their finances and brings the need for player sales. Whilst Zaniolo isn’t one they’d have wanted to see the back of, he does have a market.

Tottenham would likely be preferable for Roma to Juve, but it’s still unclear whether Spurs are as keen as presented or being used to flush out other interest and push the price, and potential personal terms, higher.