That’s according to La Nuova Sardegna, who follow up their report from yesterday with more information today.

The Italian newspaper covered Tottenham’s efforts to sign Nandez yesterday afternoon, following on from reports earlier in the day that Spurs were making their move.

They reported that the Uruguayan midfielder has his suitcases packed, ready to make the move, insisting Tottenham were ‘serious’ about getting a deal done.

According to their information today, Paratici was in talks with his Italian counterparts about a move yesterday, and the two clubs are working on an ‘onerous loan’.

That would see Tottenham pay around €10m and then have an obligation to pay €15-20m at the end of the loan period.

Cagliari chief Tommaso Giulini would have preferred to see Nandez leaving for his €36m release clause, but Tottenham have no intention of matching that, and so compromises have been made, particularly as Nandez is out of contract next summer.

The negotiation between the two clubs is well underway and could be closed ‘in a short space of time’ according to the newspaper. 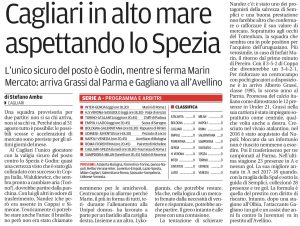 That’s because other suitors such as Inter Milan have pulled back and don’t have the economic strength to better the offer presented by Tottenham.

Interestingly, La Nuova do suggest that Nandez could be used by Cagliari in their clash against Spezia on Monday.

The idea would be that a good performance could ‘strengthen his market value’ and get the Serie A side a better deal.

That suggests a deal is perhaps not as close as is being suggested, and it may be a few days before we see it finalised.